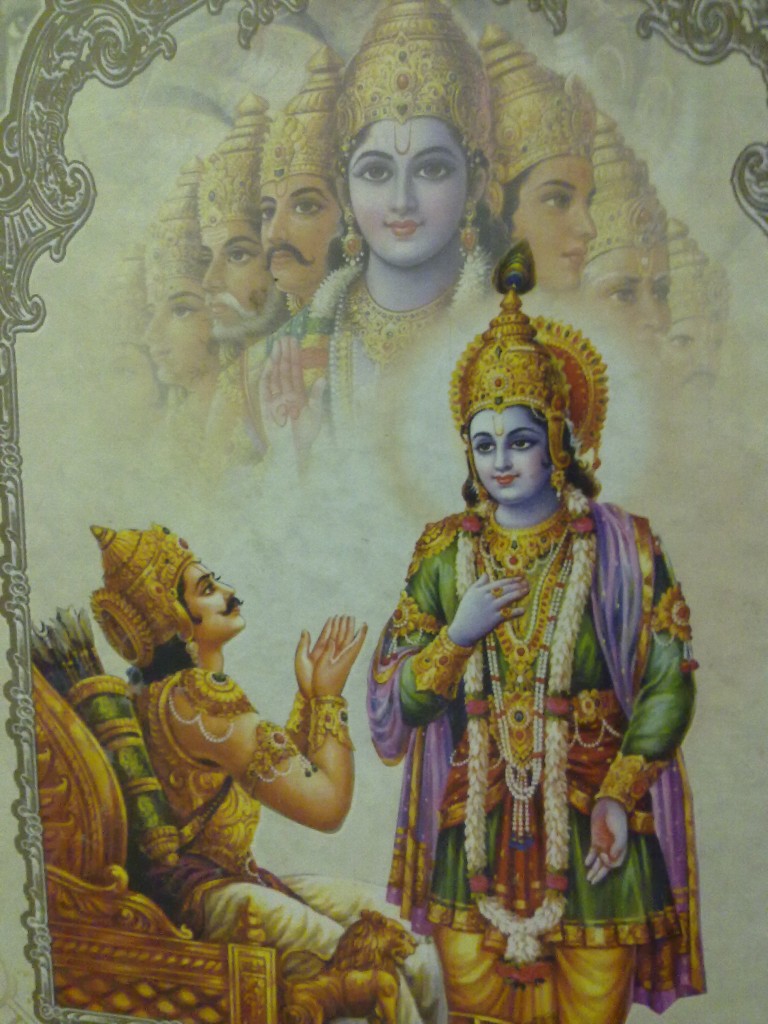 The Bhagvad Gita is the most beloved scriptures of India with a wide range of followings across the country. It is the divine Song of  the Lord and can be considered as one such book that all masters depend upon as a supreme source of scriptural authority. It occurs in the Bhishma Parva of the Mahabharata, comprises eighteen chapters from 25th to the 42nd .

This ancient knowledge was first transferred from Surya (The SUN) to King Ishvaku. Then this most secret and sacred knowledge disappeared in sands of time. Later same was revealed by Lord Krishna in the dramatic event of Mahabharata  to Arjuna in the form of great Song of the Lord unfolding all its wisdom stanza by stanza and chapter by chapter.

Surprisingly this knowledge is as practical and relevant today also as it was in that era of Mahabharata. The world today is drowned in an ocean of sorrow and is struggling to come out of it seeking the various worldly objects which can bring in happiness. This want of worldly objects is not just limited to food and shelter, but mind craves for more sensational pleasures as well. Today the problem of humanity is not juts the survival but it’s the craving and pursuit of pleasures associated with senses at physical, emotional and intellectual level. The source of all pains and sorrows of mankind is the ‘ATTACHMENT‘ and ‘FEAR‘. Man is attached to his near and dear ones and is unable to expand the circle of his actions so as to include all human beings in it; his actions are limited to the welfare of his family only and at the most to his friends/relatives. Because of which his actions in personal life and as well as in professional life are biased and he is also afraid of uncertainties which may happen to him and his near and dear ones.

Arjuna was also in the same state of mind when the teachings of Geeta were given to him by the Lord. His mind was clouded with attachment and fear. He was grieving because his near and dear ones were going to die and he felt that he may incur papa (sin) if he go ahead with the war. There was a lack of role clarity and he was not able to take right decision because of his fears. Lord Krishna then in the middle of the battle field gave him the knowledge of Geeta and motivated him to follow the path of Dharma by understanding his role and acting accordingly without getting affected with his emotions. Arjuna was then came out of his equipoise state of mind and stood up to perform his karma (action). Today we as professionals also face such situations many times in our workplace when we could not take a decision because of fear of uncertainties or our decisions are biased because of our attachments/inclinations. In fact in varying degrees every man is a victim of disease which Arjuna’s body and mind was experiencing at that time, and every man needs the cure of Geeta to perform right actions at right time.

It simply does not mean that Geeta advocates the wars and violence. It is a call to each one of us to get up and fight the battle of our own life accordingly. You can look soft from outside but you cannot afford to be weak from inside as more strong you are from within, more efficiently you will be able to fight against your own negative emotions – fear and attachment and as a result you will be able to take tough decisions of life effectively.

My shat-shat pranams to the Geeta Mata and to Lord Kirshna for providing us such a universal source of knowledge which guides us today also in all types of life situations.

So true. Honesty and everything recogznied.

Thanks for the insihgt. It brings light into the dark!